Mauritius is an attractive island in the Indian Ocean that welcomes foreign investors with an open economy, a favourable tax regime and a modern banking system.

The island which covers an area of 1,865 square kilometres, is situated some 2,000 kilometres off the south east coast of Africa. More than 150 kilometres of white sandy beaches and transparent lagoon are protected from the open sea by the world’s third largest coral reef which almost surrounds the island.

Being of volcanic origin, Mauritius has a central plateau which is about 400 metres above the sea level. Mountains scattered throughout the island, fast flowing rivers, tropical forests and plants are other features that add to the natural beauty of the island. Mauritius enjoys a maritime sub-tropical climate. The summer season lasts from October to May with temperatures averaging 27°C, while in the winter months temperature average 22°C. The topography of Mauritius makes the central plateau more humid and cooler that the other regions.

The Dutch were the first settlers on the island in 1598 and named it after their ruler, Prince Maurice Van Nassau. It was under the French Governor, Mahé de Labourdonnais , that Mauritius experienced its first development: a harbour was built at Port Louis, which became the capital of Mauritius. Port Louis being the safest harbour for vessels on their way to India, prompted the British to occupy the island in 1810. Indentured labourers were brought in, mainly from India to work in the sugar cane fields. Mauritius achieved independence on the 12 March 1968 and adopted a constitution based on the British Parliament system. On the 12 march 1992 Mauritius became a Republic and it continues to form part of the British Commonwealth.

The population of the Island is approximately 1,200,000 made up principally by people of European, African, Indian and Chinese origin. This has resulted in a unique blend of races, cultures and religions. Mauritius takes pride in the fact that these different cultures coexist in peace and succeed in creating a cultural entity that is distinctly Mauritian.

The British ruled Mauritius for 158 years until 12 March 1968 when it became an independent country within the Commonwealth. The Republic of Mauritius is a Westminster style democracy. The President is the Head of State and Commander in Chief. Full executive power rests with the Prime Minister who is head of Government. The Members of Parliament are elected every five years by popular vote and a number of political parties contest the elections every five years, reflecting the country’s firm commitment to a multiparty political system.

English is the official language. However, the Mauritian population is largely bilingual, being equally fluent in English and French. Creole is also spoken and understood by everyone.

Since independence in 1968, Mauritius has developed from a low income, agriculturally based economy to a middle-income diversified economy with growing industrial, financial, and tourism sectors. For most of the period, annual growth has been of the order of 5% to 6%. The government’s development strategy centres on foreign investment. Mauritius has attracted more than 15,000 offshore entities, many aimed at commerce in India and South Africa, and investment in the banking sector alone has reached over $1 billion. The economy in 2000 grew by 8.9% and the Gross National Income per capita at market prices reached 101,948 rupees. Unemployment rate for 2000 is estimated at about 8.0% while inflation stood at 4.2%.

The legal system of the Republic of Mauritius derives from both French and English sources. During the French rule (1715 until 1810) the Island’s system was governed by the French Napoleonic Code which remained in force under the British rule with subsequent amendments in civil and criminal procedural laws and company law.

Mauritius, therefore, enjoys a hybrid legal system combining both the civil and common law practices. Though being a Republic, Mauritius still remains a member of the Commonwealth and the right of appeal to the Privy Council is preserved.

The Republic of Mauritius, a presidential democracy modelled on the British system of parliamentary democracy, guarantees the separation of the legislative, executive and judicial powers.

The President is the head of state and Commander-in-Chief, while the Prime Minister has full executive power and is the head of Government. The sixty-two members of the National Assembly are elected every five years by universal adult suffrage. All major political parties are represented, reflecting the depth of democracy prevailing in Mauritius. Parliament is the legislative authority in Mauritius.

Facts and Figures
The People

The population of the Island is approximately 1,300,000 made up principally by people of European, African, Indian and Chinese origin Mauritius takes pride in the fact that these different cultures co-exist in peace and succeed in creating a cultural entity that is distinctly Mauritian. 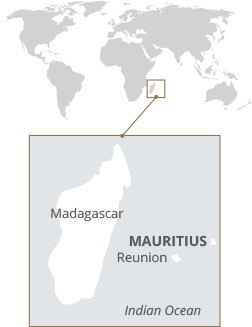 17th November 2022, Hong Kong - OCRA Worldwide (OCRA), announces today that it has completed the strategic merger with Asia Pacific’s premier corporate services provider Acclime (www.acclime.com). This is the latest step in Acclime’s active expansion as the Asia specialist in compliance and corporate services throughout the region.

Established in 1975 and led by Bart Dekker and Dharmesh Naik, OCRA is one of the industry pioneers in the corporate services sector with a full suite of corporate services from company formation, company secretarial support, accounting, and HR services. Over the past 40 years, OCRA has become a truly global business by providing very personalised services to their clients, most of whom are private investors or companies investing abroad.

From its founding base in Europe, OCRA has morphed over the past decade to focus on the faster growing markets of Asia and the Indian Ocean, and currently has teams in Hong Kong, Shanghai, Singapore, Mauritius and the Seychelles with around 80 staff. Additionally, OCRA is licensed in Samoa and the UAE to provide incorporation services to clients and referral partners.

"The high quality of the team, the interesting gateway jurisdictions of Mauritius and UAE which are important investment hubs for Africa and India, and the synergy of offering OCRA clients more services and Asian locations for expanding their business were the strategic logic for Acclime's interest in acquiring OCRA," said Martin Crawford, CEO and Co-Founder of Acclime. "We look forward to introducing OCRA’s corporate clients to our regional experts in China, Hong Kong, Australia, Cambodia, Indonesia, Malaysia, Thailand, India, Philippines, Singapore and Vietnam," he added.

The sale of the business was managed by the corporate advisory team of Mazars in London (Paul Joyce & Fred Dearden), acting for the ultimate shareholder of OCRA, and was opened for bids. "Acclime was chosen as the preferred bidder as the team recognised the cultural similarities, with high quality, personalised services at the core," said Bart Dekker, OCRA’s Managing Director, Asia Pacific. Dharmesh Naik, OCRA's Managing Director, Middle East and Indian Ocean, added, "We are excited and delighted to become an integral part of a large international team with the established resources across Acclime's network, and to execute the transaction in line with OCRA's long term succession plan in the interest of all of our stakeholders."

OCRA will operate as an independent business unit within Acclime, supported by funding, IT and marketing initiatives that will grow the business further. Bart Dekker and Dharmesh Naik will remain running the business post-acquisition.

The transaction is subjected to regulatory approvals in several locations and Acclime is expected to complete the acquisition by the end of 2022.

About OCRA
Established in 1975, OCRA is one of the industry pioneers in the corporate services sector with a full suite of corporate services from company formation, company secretarial support, accounting and HR services. For over 40 years, OCRA has been providing personalised services to its clients, most of whom are private investors or companies investing abroad.

About Acclime
Acclime, the premier corporate services provider in Asia, helps corporate and private clients to advance their businesses and interests in difficult-to-navigate markets in emerging Asia. The company’s vision is to reinvent the corporate services sector with innovative solutions that are seamlessly delivered to the highest global standards.